Demolition of the interior (Photograph by ANKORA, July 2022).

“Palacio Bellas Artes is the oldest cinematograph in Spain and one of few pre-World War I examples of this architectural typology preserved in Europe,” (Donostitik.com 2022).

In 2014, ICOMOS International committee on 20th Century Heritage (ISC20C) initiated negotiations with the city authorities of San Sebastian to support the conservation and adaptive reuse of the cinema. ISC20C had been asked to consider placing an international Heritage Alert on the site by community members. However, it was hoped that the city would act to avoid negative impacts to the building and find an appropriate means of conserving the cinema to avoid international comment. ISC20C met officials and presented at meetings and conferences supporting the conservation of this landmark building, and agreed not to issue an Alert, given the positive negotiations.

In 2015, the Basque government acknowledged the importance of the building and agreed to protect the Palacio Bellas Artes at the highest level in Spain as a “BIC-Bien de Interés Cultural,” with the strong support of ISC20C.

In 2017, more threats arose despite this protection. The presidents of ICOMOS Gustavo Araoz and the ISC20C Sheridan Burke wrote to the city authorities again, seeking dialogue on the development proposal, trying to convince the authorities to maintain the protection of  the site as a BIC.

Given the lack of respect shown by the public authorities for the protection of heritage, on 30 March 2019, ICOMOS presented the International Alert to the state authorities, informing the media.

In agreement with the municipal authorities, the property owner managed to obtain a permit to demolish the dome for reasons of urgency and danger. The Spanish association, ANKORA, sued the property owner and the judge dismissed the lawsuit, authorizing them to demolish the dome for security reasons, but with the condition of restoring it to its original state.

Later, the property owner requested a permit for the rehabilitation of the building for the demolition of the roofs and the interior, the modification of parts of the facades and the construction of a non-compatible addition incorporating a large volume above the existing building and below ground level, all for residential use as an apartment hotel, in a clear speculative operation, that is, reproducing the original dome. The result is a pastiche.

Given this situation, another lawsuit was filed by ANKORA; however, the Supreme Court rejected the claim to maintain the protection of the building and the proposal is being carried out.

Given the circumstances, ICOMOS Spain presented allegations to the City Council and directed negotiations with the Mayor's Office including a letter addressed to the Mayor of the city on 30 September 2021. Unfortunately, it did not produce positive results.

Sadly, this negative result, despite the fact that the building enjoyed the highest possible legal protection in the State, sets a dangerous precedent for the protection of heritage in Spain. Again, it is further proof of the contempt that the authorities show for cultural heritage, even more so with that of the 20th century. 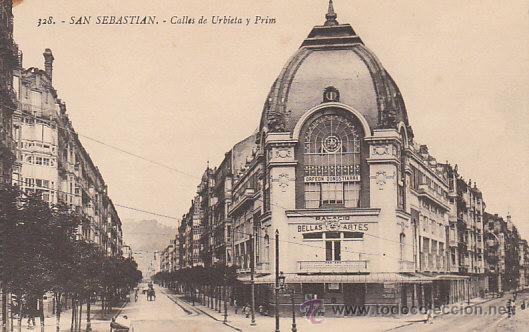 The Palacio Bellas Artes was built in 1914 in San Sebastian, Spain. It is one of the earliest extant examples of a purpose-built movie palace left in the Basque Country and in all of Spain. Its rich architectural, cultural and social history are a vital part of the history of San Sebastian which was acknowledged by its being listed as Grade I cultural heritage in the Master Plan of San Sebastian in 1995. It was also declared as an "Inventor Cultural Property" with a Monument category by the Basque Government by an Order on March 4, 2015 (BOPV of March 6). This should have been enough to protect the building. Unfortunately, both the physical and political conditions surrounding this landmark have changed in recent years and the building is now severely threatened.

In 2014 the International Council of Monuments and Sites International Scientific Committee of 20th Century Heritage (ICOMOS ISC20C) prepared a Heritage Alert to call attention to the impending threat to the building. Rather than issue the full Heritage Alert, letters were written by the President of the ICOMOS ISC20C and the President of all of ICOMOS, requesting the assurances for the protection of the building by the Spanish authorities.

The importance of the building was acknowledged, and the Basque government agreed to protect the site with the highest level in Spain as, “BIC-Bien de Interés Cultural”. It appeared that the building had been saved. Unfortunately, the building owner, Sociedad Anónima de Deportes y Espectáculos (SADE), has since requested permission from the City Council of San Sebastian to demolish the dome at the top of the building which was granted. Not only was this one of the building’s most important character defining features, but it is now feared that this is only the beginning of the total demolition of the building. Therefore, the ICOMOS ISC20C and ICOMOS Spain are now issuing this Heritage Alert and requesting the authorities protect and conserve this invaluable landmark of Spain.

ICOMOS Spain and the ICOMOS ISC20C are requesting that the authorities of San Sebastian and the Basque Country honour their previous acknowledgement of the importance of the Palacio Bellas Artes building and work to protect and restore it. Future redevelopment should be encouraged but should be done in an appropriate manner that does not adversely affect the architectural, historic and cultural values of the building and surrounding site.

To the citizen's group "Áncora Agrupación Civica" and lastly to José Gabriel Mújika, the director of the Spanish daily newspaper "Diario Vasco".
To read a copy of these letters click here.

To read the letter of the president of ICOMOS Spain in regards to the Heritage Alert click here. 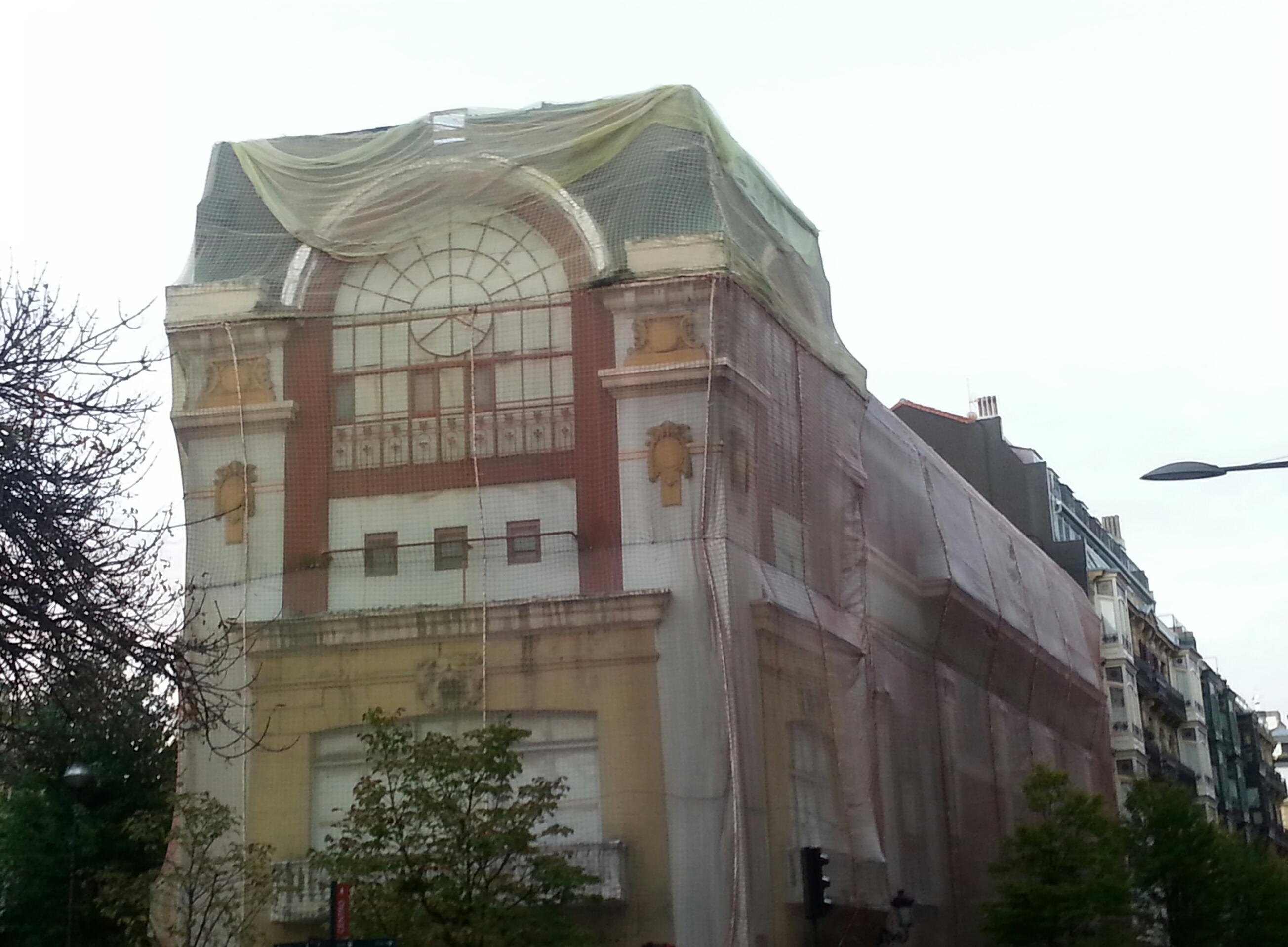 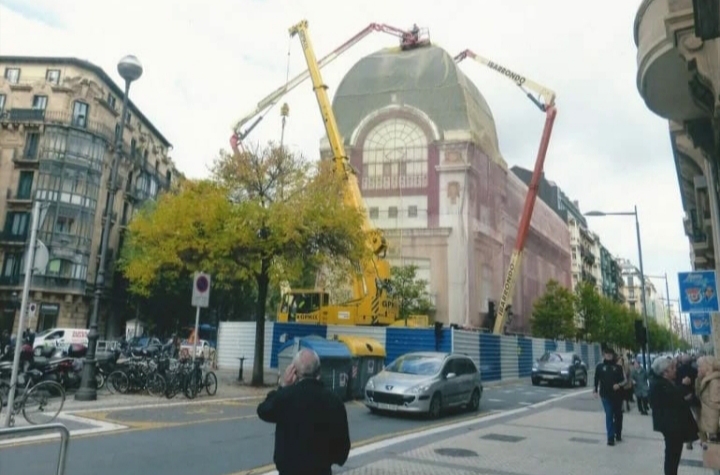