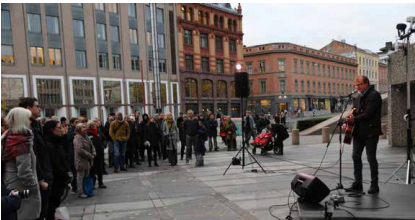 On 26 October 2016, a demonstration was held in front of the Y-block to protest its demolition. Musicians performed and protestors gathered around the building. Despite their efforts, State Secretary Paul Chaffey announced later that evening that the decision of demolishing would stand. The Directorate for Cultural Heritage suggested as an ultimate solution that the North wing be demolished, leaving the curve around the H-block intact.

Photo: Lars Lillo-Stenberg performing to support the protest outside of the Y-block on 26 October 2016 © Arve Henriksen

The International Scientific Committee on Twentieth Century Heritage (ISC20C) of the International Council on Monuments and Sites (ICOMOS) has released an International Heritage Alert regarding the threatened demolition of the Y-block of the Government Quarter in Oslo, Norway. 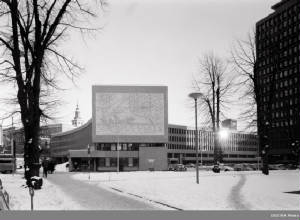 This action supports the conservation initiatives of ICOMOS Norway and confirms international concern about threats to the heritage significance of this important modern heritage complex in the center of Oslo.

ICOMOS Norway has undertaken extensive research into this case, and confirms that the architectural and artistic merit of the Y-block, as well as its historical significance, is uncontested. Architect Erling Viksjø conceived the high-rise H-block and the lower Y-block as whole, clearly connected to similar contemporary headquarters for democratic purposes (e.g. United Nations, New York and UNESCO, Paris). The high-rise H-block was erected in 1958 with pioneering treatment of the sandblasted natural concrete and integrated works by modern artists, including contributions by Pablo Picasso. In 1969, the building complex was completed by the addition of the sculptural Y-block. Its three curved wings define three urban spaces of individual character. Picasso's "Fishermen" in one of the facades is an epitome of public art integrated within this extraordinary complex.