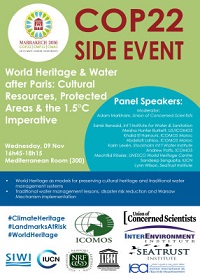 At the UN Climate Change Conference (COP22) in Marrakech from 7-18 November 2016, US/ICOMOS and ICOMOS Morocco will participate as co-hosts of two official side events on key issues of cultural heritage.

The first, entitled "Culture on the Move: Sea Level Rise, Cultural Heritage and Climate Mobility," is led by the International National Trusts Organisation and the International Polar Foundation. The second event, "World Heritage and Water after Paris: Traditional Knowledge, Climate Impacts & Resilience," is led by the Union of Concerned Scientists. The event precedes the "Water and Heritage for the Future" conference planned by ICOMOS Netherlands from 25-26 November 2016.

ICOMOS is also co-hosting a network event with the Union of Concerned Scientists that will be held at the UNESCO COP22 Pavilion.