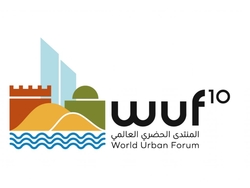 The International Council on Monuments and Sites (ICOMOS) had a  strong presence at the 10th Session of the World Urban Forum (WUF10) in Abu Dhabi, UAE from 8 to 13 February, 2020. Convened by UN-Habitat. The biennial World Urban Forum is the foremost international gathering for exchanging views and experiences on sustainable urbanization; this year, the WUF theme was 'Cities of opportunities - Connecting Culture and Innovation'.

UN-Habitat and ICOMOS celebrated the signing of a Memorandum of Understanding (MoU) during the 10th Session of the World Urban Forum (WUF10), held in Abu Dhabi, UAE from 8 to 13 February, 2020. Aimed to consolidate their partnership in ensuring that the world’s cultural heritage is protected, managed and harnessed for sustainable urban development, the MoU was signed on February 11, 2020 by Rafael Tuts, Director of the Global Solutions Division at UN-Habitat and Peter Phillips, Secretary General of ICOMOS.

The MoU has created a wide framework for collaboration between the two organizations, with a particular emphasis on urban regeneration and reconstruction, especially in the context of climate change. Its implementation is envisioned through the four key Domains of Change (DoC) of the UN-Habitat Strategic Plan 2020-23: (a) Harnessing urban regeneration to reduce spatial inequality (DoC 1); (b) Leveraging cultural heritage to enhance shared prosperity in cities (DoC 2); (c) Bringing climate and heritage actions closer together (DoC 3); and (d) Mainstreaming heritage considerations in urban reconstruction and resilience (DoC 4). The MoU particularly targets results including: (a) Policy inputs on urban heritage in global and local guidelines, legislation, plans and projects; (b) Knowledge on the relation between culture/heritage and cities/territories; (c) Active partnership within existing UN-Habitat frameworks; (d) Pilot joint projects on customizable solutions for heritage conservation; (e) Monitoring processes and data on heritage management.

A bilateral meeting was also held during WUF10 among ICOMOS and UN-Habitat representatives, Peter Phillips, Ege Yildirim and Eric Huybrechts, where work was begun on the preparation of the first biennial Work Plan, as defined in the MoU. We look forward to actively implementing this important agreement, to help advance the New Urban Agenda, the 2030 Agenda for Sustainable Development, the UN Framework Convention on Climate Change and other related international policy agendas. 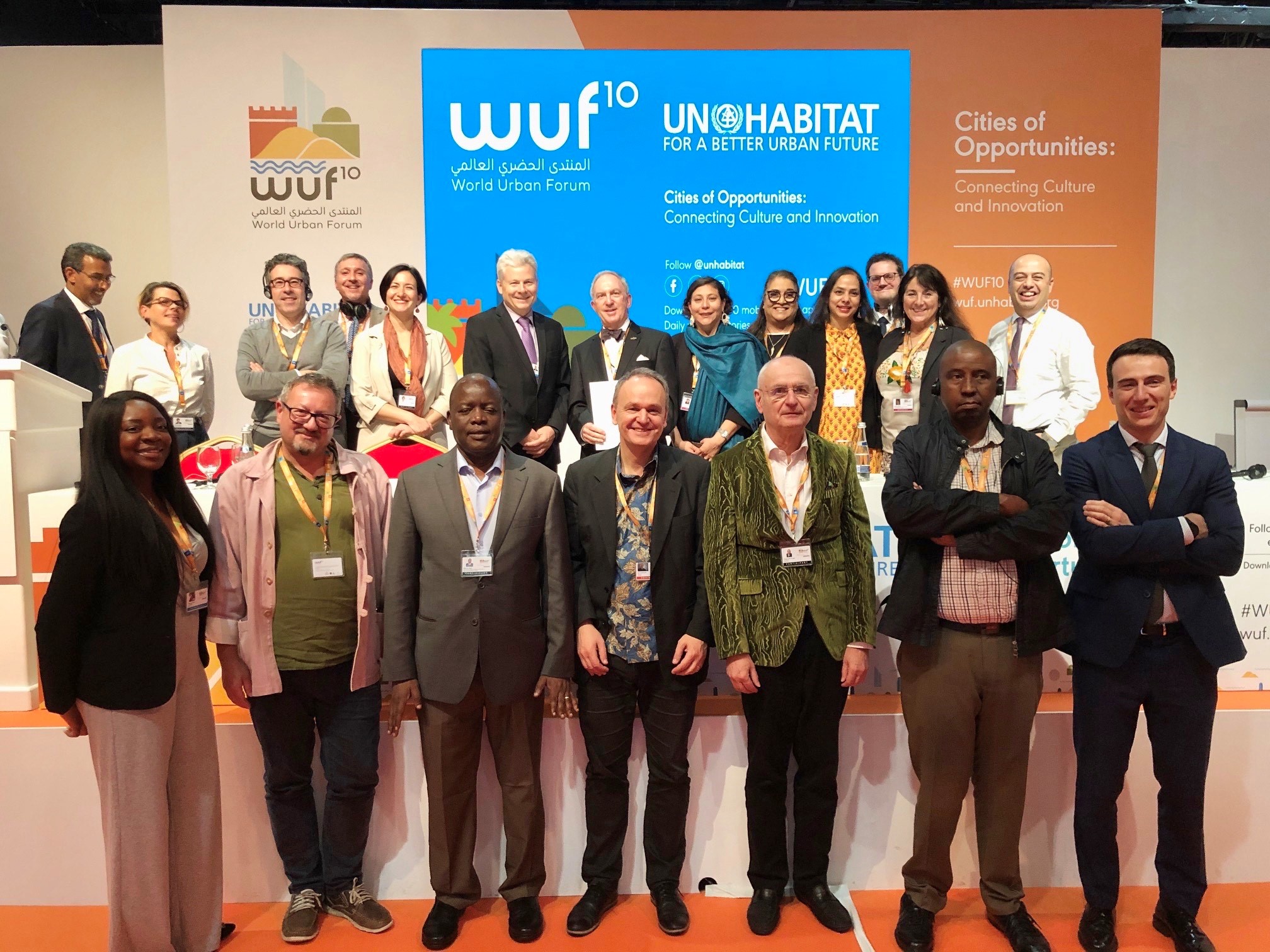 The world’s premier gathering for urbanism

Convened by UN-Habitat, the biennial World Urban Forum is the foremost international gathering for exchanging views and experiences on sustainable urbanization. This year, the WUF theme was 'Cities of opportunities - Connecting Culture and Innovation'. Responding to this unique opportunity to raise the profile of cultural heritage in the urbanism community, ICOMOS was strongly represented, both institutionally and through the diverse roles played by its participating members, such as the ICOMOS Climate Change and Heritage Working Group (CCHWG) and the ICOMOS Sustainable Development Goals Working Group (SDGWG).

The Climate Heritage Network (CHN), coordinated by the ICOMOS CCHWG, was particularly active, with a suite of sessions, including the Special Session titled “Urban Culture and Climate Change Action: The intersection of urban cultural heritage and climate change” organized by UN-Habitat on February 9, with closing remarks by Andrew Potts (see podcast); Networking Event 89 titled “Mobilizing Arts, Culture and Heritage for Transformative Climate Action in Cities and their Territories”,  organized by the CHN on February 11; and events of the Planners 4 Climate Action network with Eric Huybrechts as a speaker and as a trainer. More detailed information on CHN activities can be found at the link: climateheritage.org/world-urban-forum-10-a-breakthrough-moment-for-cities-climate-change-culture/

Heritage and the SDGs

The ICOMOS SDGWG also had a chance to showcase some of its activities related to urban heritage and sustainability. On February 10, Side Event 39 titled “Measuring and Communicating Cultural Heritage for Sustainable Urban Development: good practices and global perspectives of Riyadh Museum District Youth Challenger" was co-hosted by ICOMOS and Dar al Uloom University, with speakers from United Cities and Local Governments (UCLG) and UN-Habitat. On the same day, Networking Event 59 titled "Culture2030goal: Strengthening the global platform on culture and the SDGs", organized by UCLG, featured Ege Yildirim among speakers, who, along with Stephen Wyber of the International Federation of Library Associations (IFLA), presented the milestone report “Culture in the Implementation of the 2030 Agenda”, jointly prepared by ICOMOS, UCLG,  IFLA and other members of the Culture 2030 Goal Campaign Network.

Supporting a Wide Range of Events and Networks

Beside these, ICOMOS members were invited to contribute to a variety of other WUF10 events by our partner organizations. Some of these were high-level events live-streamed and broadcast at UN Web TV. Peter Phillips made the opening intervention in the 2nd Roundtable of the World Assembly of Local and Regional Governments (WALRG) held on February 8 (see podcast), as well as an intervention during the launch of the UN-Habitat Flagship Program “Inclusive, Vibrant Neighbourhoods and Communities” held on February 12. The WALRG issued a statement on the occasion of WUF10, which also received inputs from ICOMOS. Julianne Polanco and Ege Yildirim were among the panelists of Dialogue 3 on “Tradition and Modernity: A creative convergence for sustainable cities” held on February 11 (see podcast). Donovan Rypkema was among the panelists of Dialogue 5 on "Urban Planning and Heritage Preservation - Regeneration" held on February 12 (see podcast).

Throughout the duration of WUF10, Donovan Rypkema and his colleagues at Heritage Strategies International participated in the Urban Expo, at booth H9-32. 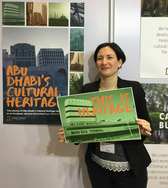 ICOMOS also participated in the steering committee meeting of the World Urban Campaign of UN-Habitat, where we are an associate partner, represented by Claus-Peter Echter, Peter Phillips and Eric Huybrechts. ICOMOS delegates Ege Yildirim and Eric Huybrechts attended the steering committee meeting of the Habitat Professional Forum, a group of urban professionals worldwide that provides expert advice to the Executive Director of UN-Habitat. New statutes were adopted by the Forum and a new chair and co-chairs elected. ICOMOS members contributed to the Habitat Professionals Forum Roundtable on February 12, where Eric Huybrechts was moderator of the group for UNH Strategic Plan- DoC 2: Shared Prosperity of cities and regions, while Ege Yildirim was rapporteur of the group for DoC 4: Urban Crisis Prevention and Response (see podcast).

The World Urban Forum concluded with a reaffirmed sense of determination and urgency, both reflected in its official outcome document, the Abu Dhabi Declared Actions, in Executive Director H.E. Maimunah Mohammed Sharif’s emphasis on commitments to action, and in the enriching exchanges among colleagues and stakeholders working on urban issues around the world. The presence of ICOMOS at WUF10 was very beneficial in this regard, in particular for the deepened partnerships and strengthened voice of cultural heritage in the urbanism debates.

Some key messages that we, as the heritage community, received, included recommendations for engaging in climate action through underlining the costs of inaction, bringing heritage together with modern technology, being inclusive of people, and speaking up at international platforms. Among key messages that we were able to have amplified in WUF10 platforms included culture and heritage being both a product and an enabler of sustainable urban development, conserving embodied energy, reducing waste and infrastructure costs; the need for impact assessment methods to ensure respect for biodiversity and cultural diversity; that the greenest building is the one already built, vernacular solutions are often most effective in terms of impact and cost in addressing critical development challenges; and that the cities we build today are tomorrow’s heritage.

The Declared Actions have strong content regarding cultural heritage in its main text, while more stakeholders need to undersign commitments to action to address culture and heritage in their policies and projects. We look forward to improvements in this regard, as we work together with UN-Habitat, UNESCO and all other partners in the convergence of cultural heritage and sustainable urban development.

The article on the preparation of WUF10