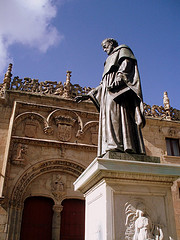 Prepare the International Day on Monuments and Sites!

In 2013, the theme is Heritage of Education (schools, universities, libraries, academies, etc.) in its expressions in different geo-cultural contexts.

Throughout history and in different geo-cultural contexts, education was practised in a wide range of places or buildings. Open spaces, agora or the protective shadow of a tree could be useful for the transmission of knowledge, but also specific institutional buildings such as schools, universities, madrasas, academies, libraries, monasteries, etc.

Many of those buildings, groups of buildings or sites are recognised as bearing not only social or institutional values but also historic or artistic ones, and have therefore become a significant part of our cultural heritage.

The protection and conservation of the heritage of education not only implies preserving cultural assets but also, at the same time, celebrating education as one of the fundamental human tasks.

Read more about the theme in English – French - Spanish