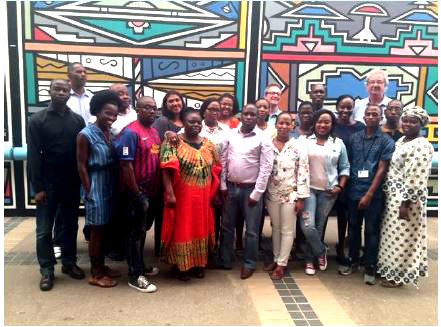 ICOMOS South Africa has invited representatives from 17 African countries to be part of a master level pilot course in human rights and cultural heritage from 13 to 17 March 2017. The training, led by the Norwegian Centre for Human Rights University of Oslo, was held at Ditsong Museum, Pretoria. The report is now available.

1. A general introduction to the international human rights system, including its institutions and mechanisms;

2. A specific introduction to relevant cultural rights and texts, as well as the UN and UNESCO institutional framework; and

Our Common Dignity: Towards Rights-Based World Heritage Management was started in 2007 by ICOMOS Norway. From a national focus the initiative was expanded into international collaboration between ICCROM, ICOMOS and IUCN (AB) in 2011 - in close contact and dialogue also with the World Heritage Centre.

The training is a result of the collaboration between the “heritage world” and the “human rights world”. The first Pilot Training Course in the complex topic of Human Rights and Heritage Management was in Oslo in 2016, and is being followed by training in India and South Africa.