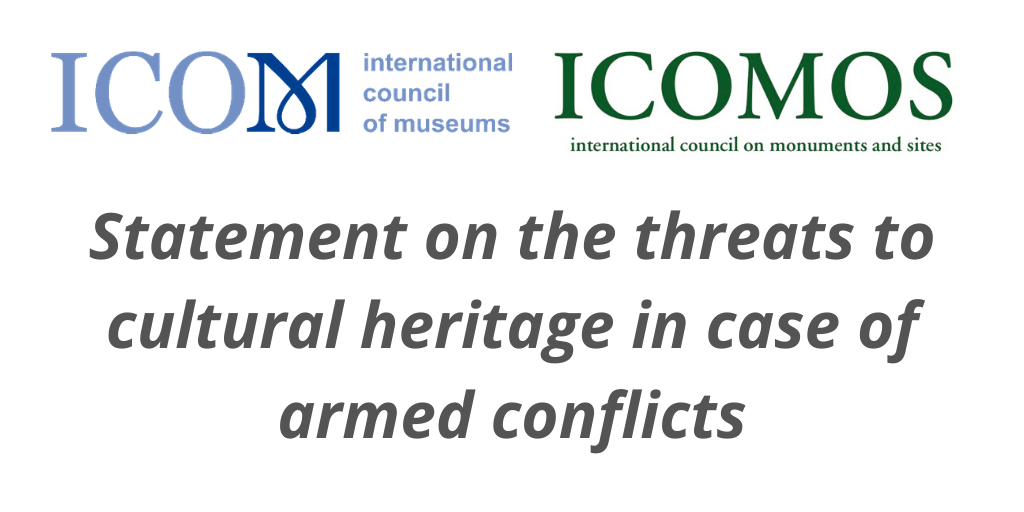 In armed conflicts and political upheavals since the turn of the millennium, cultural heritage has been increasingly targeted. It has been looted or deliberately destroyed, in order to finance warfare or to affect the identity and the confidence of adversaries. Museums as well as cultural sites are affected in many countries around the world.

The International Council of Museums (ICOM) and the International Council on Monuments and Sites (ICOMOS), as representatives of the heritage community in the world, are very much concerned about this evolution and in particular recent developments. ICOM and ICOMOS remind all parties of armed conflicts of the 1954 Hague Convention for the Protection of Cultural Property in the Event of Armed Conflict.

There, States Parties agree that “any damage to cultural property, irrespective of the people it belongs to, is a damage to the cultural heritage of all humanity, because every people contributes to the world's culture." The United States of America ratified the Hague Convention in 2009, Iran in 1959.

Both countries are also States Parties to the 1972 World Heritage Convention, which the United States of America was the first country to ratify in 1973 and played a key role in promoting. Iran is home to 24 UNESCO World Heritage Sites of great cultural and natural importance – not only to Iranians, but to humanity and its collective memory.

Moreover, in 2017, the UN Security Council unanimously adopted Resolution 2347 that states: “directing unlawful attacks against sites and buildings dedicated to religion, education, art, science or charitable purposes, or historic monuments may constitute, under certain circumstances and pursuant to international law a war crime and that perpetrators of such attacks must be brought to justice”.

ICOM and ICOMOS jointly and strongly condemn any deliberate destruction of cultural heritage. We call upon all parties to respect the international agreements that rule armed conflicts, and to protect the world’s cultural heritage wherever it is, regardless of religious beliefs or political intentions.