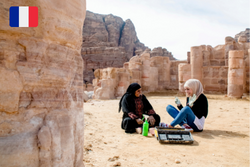 At ICOMOS, we strongly believe that heritage can play a key role in addressing the SDGs, but more work is needed to understand and address the potentials and challenges that link heritage to each Goal. The Policy Guidance document is the first step in addressing this gap. Indeed, it seeks to respond to the current needs of the professional and broader society, while shaping high-level policy and grassroots implementation, building synergies and strengthening advocacy.

The work of ICOMOS has been founded, from the outset, on a principle closely aligned with sustainability: the common responsibility to safeguard the heritage of humanity for future generations. In the past decade, ICOMOS has increased its focus on heritage within the context of sustainable development, issuing documents such as: the “Paris Declaration on Heritage as a Driver of Development” (2011a); the “Concept Note on Cultural Heritage, the UN SDGs and the New Urban Agenda” (2016); the “ICOMOS Action Plan on Cultural Heritage and Localizing the SDGs” (2017a); and the report “The Future of Our Pasts: Engaging Cultural Heritage in Climate Action” (2019a). The ICOMOS Policy Guidance for Heritage and Development Actors is the latest ICOMOS document to demonstrate the potential of harnessing heritage in achieving sustainable development, and its translation into French makes it accessible to 321 million French speakers and thus 17,5% of the world population.

The translator of the text, Laure Marique of ICOMOS Belgium believes that the translation of this important ICOMOS document promotes multilingualism, which can foster social cohesion and intercultural communication, and contribute to positive and sustainable democratic societies.

Naima Benkari, an ICOMOS International member based in Oman who contributed to the translation, agrees that the translation is an utmost necessity for more inclusive and culture-sensitive policies and assures their better understanding and implementation on the ground.

Translations to other languages are being planned by the SDGWG and it hopes to spread the important message of the holistic role of heritage to support the great ambition of the SDGs. For interested parties who would like to translate the document to their own languages, please get in touch with:
Ona Vileikis, ona.vileikis@gmail.com, SDGWG Task Team Coordinator for Communications

For more on the report, see the press release: English version / French version