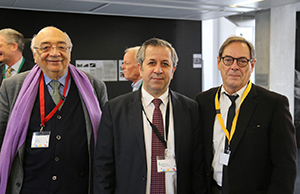 ICOMOS joins the cultural heritage conservation community in praising the exemplary work led by Professor Maamoun Abdulkarim during his tenure, which he concludes today, as Director General of Antiquities and Museums in Syria.

Over the past five years, Maamoun Abdulkarim has demonstrated unwavering energy and commitment to safeguarding Syrian heritage and fighting illicit trafficking of archaeological objects, engaging in a constructive dialogue with scientific and international organizations. ICOMOS, of which he is a member, has always supported his tenacity and his courage, and has had the opportunity to benefit from the remarkable quality of his work on several occasions.

Thus, when he was invited to the symposium organised by ICOMOS on post-trauma reconstruction in March 2016, he firmly stated that "the strategy that the Syrian experts have adopted is that of reconstruction, in order to send a message to terrorists: you destroy our heritage, we will do everything to rebuild it." Thanks to Maamoun Abdulkarim’s dedication to the debate on the reconstruction of cultural heritage, the immediate translation into Arabic of the "ICOMOS Guidance on Post Trauma Recovery and Reconstruction for World Heritage Cultural Properties" in March 2017 was possible (link).

Since 2015, he has been one of the cornerstones of the ICOMOS-led Project Anqa, alongside our partners, with the aim of ensuring the training, equipment and follow-up of a permanent team of the Directorate General of Antiquities and Museums responsible for 3D architectural surveys. At present, 3D surveys of six historical monuments in the old city of Damascus have been completed and the team can now independently carry on its work.

ICOMOS International recalls the words of Samir Abdulac, a member of ICOMOS France and Chairman of the ICOMOS Working Group for the Safeguarding of Cultural Heritage in Syria and Iraq: "Maamoun is not only a distinguished scientist but also a man of action, vision, heart, a "monuments man". For five years, he was the right man, in the right place and at the right time, when it was necessary to safeguard the Syrian and world cultural heritage. The international scientific community cannot forget his work and we can only wish him success in the future paths he will choose to take."