On 29 June 2016, the new ICOMOS National Committee in the Russian Federation held its General Conference in the World Heritage historic centre of Saint Petersburg. The General Conference was attended by 47 delegates from 12 regions in the Russian Federation, representing 246 individual members. The previous National Committee had seen its international accreditation withdrawn in 2014.

The main purpose of this General Conference was the election of the Board/Permanent Council of the new Committee, as well as its President. The meeting was attended by representatives of ICOMOS International: Ms Kirsti Kovanen, Secretary General, Ms Riin Alatalu, President of ICOMOS Estonia and representative of ICLAFI (the ICOMOS International Scientific Committee on Legal and Administrative issues) and Gaia Jungeblodt, Director of the International Secretariat.

Following an open call in early 2016, inviting Russian professionals in the field of ICOMOS’ expertise to apply for membership, this General Conference and elections mark a decisive further step towards the full re-establishment of a National Committee for the Russian Federation, in making it part again of the family of ICOMOS Committees and in renewing the participation of Russian specialists in the scientific work of ICOMOS. As only the ICOMOS Board has the statutory power to accredit National Committees, the outcomes and reports of the General Conference will now be tabled before the ICOMOS Board on 16 October 2016, in view of accreditation of a National Committee.

Out of 35 candidatures – the following 20 were elected to serve on the Permanent Council, with Academician Alexander Kudryavtsev elected as President: 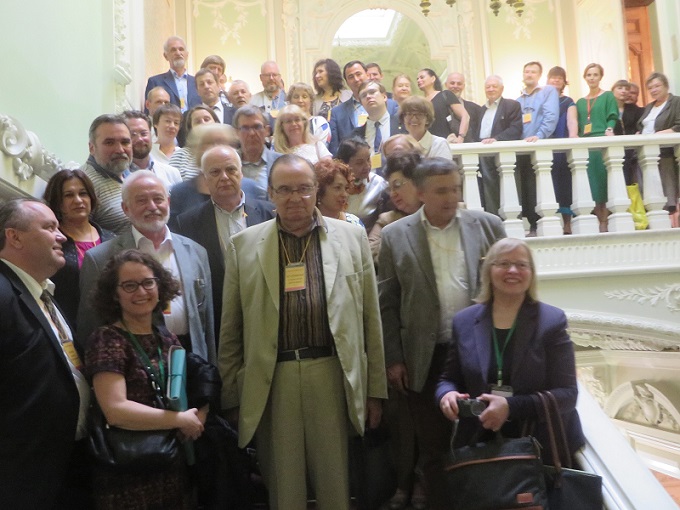 Participants and Observers at the close of the General Conference on the staircase of the House of Architect located in Polovtsov Mansion, St. Petersburg