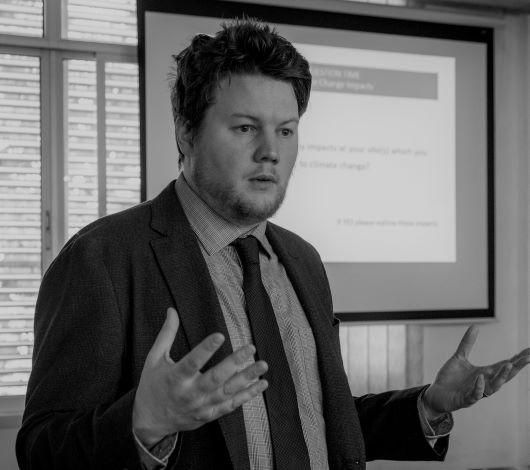 Dr Megarry takes over from Andrew Potts of US/ICOMOS. ICOMOS wishes to thank Mr Potts for his contributions to the international cultural heritage response to the climate emergency and is pleased to report the he will continue to work for ICOMOS helping to manage a variety of climate change projects.

Since the ICOMOS General Assembly first addressed climate change at its 15th Triennial General Assembly in Xi’an China in 2005, climate change has become one of the most significant and fastest growing threats to people and their heritage worldwide. The ICOMOS Climate Change and Heritage Working Group (CCHWG) was formed in 2017 and works to help support and prioritize development of ICOMOS’s climate-change policies and engagement.  In 2020, under the leadership of the CCHWG, ICOMOS declared a Climate and Ecological Emergency.

Dr Megarry is a member of ICOMOS Ireland, an archaeologist, and a Senior Lecturer in the School of Natural and Built Environment at Queen's University Belfast. His research explores the intersection between culture and climate change, and has touched on aspects of traditional ecological knowledge and adaptation, climate communication, and vulnerability assessment methodologies. He was a founding member of the CCHWG and also serves as the CCHWG Contact Person for the International committee on Archaeological Heritage Management (ICAHM).  He is the Lead Investigator on the CCHWG’s current CVI Africa Project which is funded by the UK Government; a lead author on the 2019 ICOMOS Report The Future of our Pasts: Engaging Cultural Heritage in Climate Action , and coordinated ICOMOS’s engagement with the Heritage on the Edge project.

In December 2021 ICOMOS will fulfil a longstanding goal when the International Co-Sponsored Meeting on Culture, Heritage, and Climate Change will be held, with an aim of serving as a catalyst for creating a larger role for culture and heritage in climate science and climate change responses. In recognition of his new role as Focal Point, ICOMOS has also named Dr Megarry to be its Co-Chair of the Joint UNESCO-IPCC-ICOMOS Scientific Steering Committee (SSC) which governs the Meeting.

‘I am delighted to have been appointed as the new ICOMOS Focal Point for Climate Change and Heritage and would like to acknowledge the tremendous work by Andrew Potts who has laboured tirelessly on the issue for the last four years and has left me with big shoes to fill. I would also like to thank members of the working group for their ongoing hard work and dedication.

Climate change remains the single greatest threat to our past, present and future. The scale of this challenge can seem daunting, yet I am more convinced than ever that our cultural heritage is key to the solution. I look forward to working across the ICOMOS community to respond to this challenge over the next three years’.  Dr Will Megarry, ICOMOS Focal Point for Climate Change and Cultural Heritage

Photo Credits: Will Megarry during a Heritage on the Edge workshop in 2018 in Dar es Salaam, Tanzania © CyArk.