IPCC Culture, Heritage and Climate Meeting Breaks New Ground in Efforts to Understand the Cultural Dimensions of the Climate Emergency 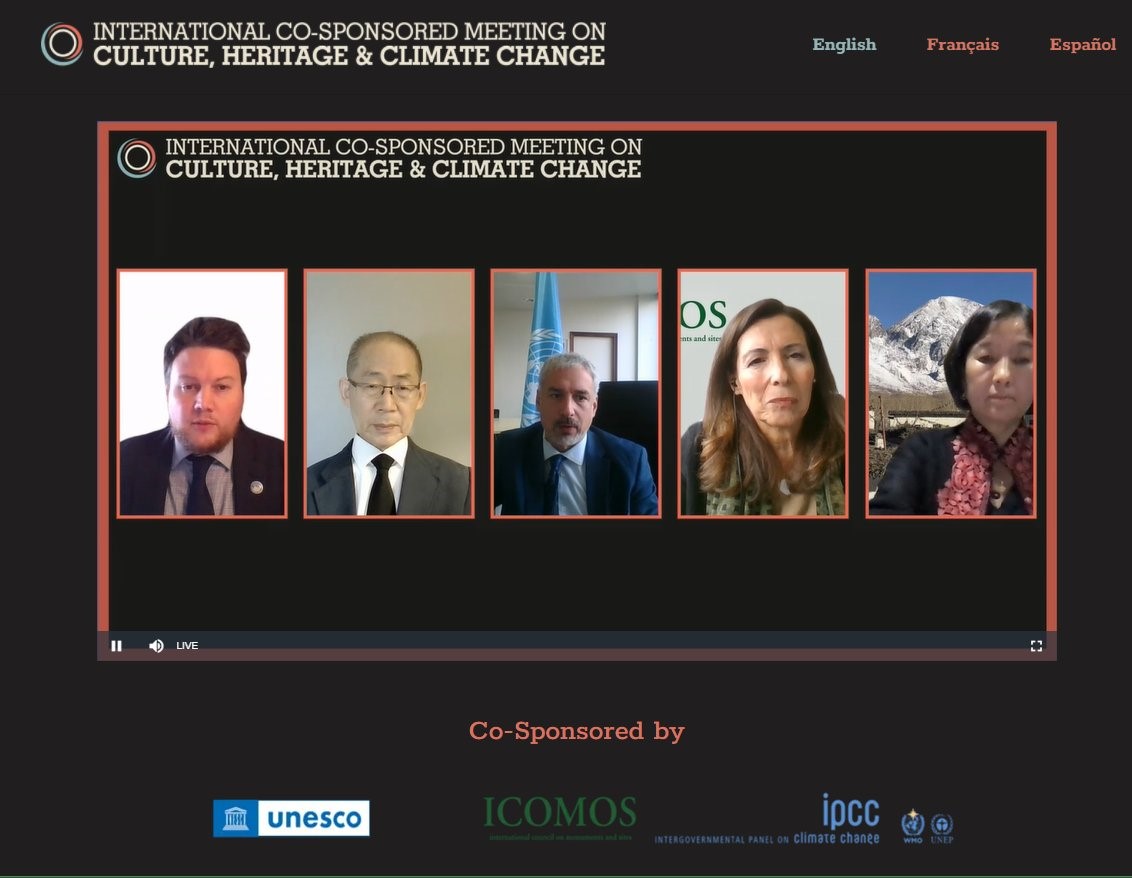 A long-awaited international scientific conference devoted to exploring the importance of cultural knowledge and heritage in understanding and responding to the climate change challenge concluded on Friday 10 December.

The week-long International Co-Sponsored Meeting on Culture, Heritage and Climate Change was co-sponsored by ICOMOS along with UNESCO and the Intergovernmental Panel on Climate Change (IPCC), the world’s leading climate science body.

Nearly 100 scientists, policymakers, practitioners and traditional knowledge holders, including over a dozen ICOMOS members, participated in a series 15 virtual sessions over the course of the week of 6 December, helping to develop and review the state of knowledge regarding connections of culture, heritage and climate change and identify gaps. Sessions were organised around three scientific questions looking at:

Three public sessions, one on each of these questions, as well as a launch event were also held. The discussions were guided by three white papers commissioned for the meeting.

The meeting was the first time in IPCC history that scientists and experts working on culture, heritage and climate change science were brough together in one forum. This represents a key milestone in a longstanding effort by ICOMOS to improve the treatment of cultural heritage in climate science, as well as progress on a 2016 request by the World Heritage Committee for closer collaboration with the IPCC.

A ‘Co-Sponsored Meeting’ is an official modality of the IPCC. Securing such a meeting on the topic of culture and heritage was one of the original objectives of the ICOMOS Climate Change and Heritage Working Group (CCHWG) when it was set up in 2017. ICOMOS’s work on the project was carried out by a team that included Dr Will Megarry, Dr Hana Morel, Sarah Forgesson, Angélique Ploteau and Andrew Potts, aided by an ICOMOS IPCC Work Stream Advisory Committee. Members of the ICOMOS Emerging Professional Working Group served as session rapporteurs.

Funding was provided  by The German Federal Environmental Foundation with additional support from the Swiss Federal Office of Culture and The National Cultural Heritage Administration of China.

The work done at the Meeting will form the basis of a report that is expected to be issued in mid-2022 that will address ways to catalyse research and collaboration around culture, heritage and climate change, and expand global capacity around these themes. The timing of the report is also designed to allow it to be a resource for several important, multi-year climate science initiatives being launched in 2022 including a Special Report on Cities and a new assessment by IPCC Working Group II on climate impacts, adaptation and vulnerability, both as part of the IPCC’s Seventh Assessment Report (AR7), as well as IPCC input into the UNFCCC Global Goal on Adaptation work plan launched at COP26.

At the Co-Sponsored Meeting Launch Event, Dr Hoesung Lee, Chair of the IPCC, stressed the need for climate science to explore and tap into all areas and forms of knowledge, including culture and heritage, in order to present comprehensive and balanced assessments of the causes, impacts and responses to climate change.  The outputs of the meeting can be a roadmap to achieving these aims, promoting greater integration of culture, heritage and diverse ways of knowing into climate science in general and the work of the IPCC in particular.  Tackling the climate emergency requires nothing less.