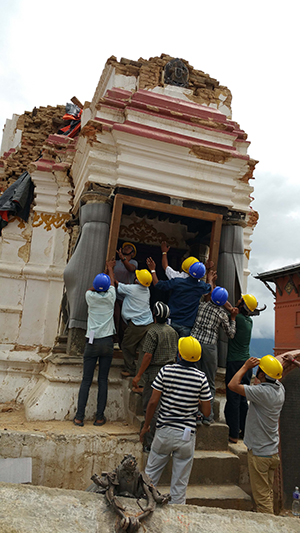 Its role: to preserve and protect

ICOMOS, the International Council on Monuments and Sites, is a global non-governmental organization associated with UNESCO. Its mission is to promote the conservation, protection, use and enhancement of monuments, building complexes and sites. It participates in the development of doctrine and the evolution and distribution of ideas, and conducts advocacy. ICOMOS is an Advisory Body of the World Heritage Committee for the implementation of the World Heritage Convention of UNESCO. As such, it reviews the nominations of cultural world heritage and ensures the conservation status of properties.
Its creation in 1965 is the logical outcome of initial conversations between architects, historians and international experts that began in the early twentieth century and that materialized in the adoption of the Venice Charter in 1964. In light of numerous studies, conferences, symposia and discussions led by its National Committees and International Scientific Committees, ICOMOS has gradually built the philosophical and doctrinal framework of heritage on an international level.


Its values: to unite around heritage

From around the world, with diverse and complementary professional backgrounds, researchers, scientists, heritage lawyers, economists, engineers, artisans, professionals, academics, private consultants, elected officials, state representatives, etc.., put their ideas and expertise together in a spirit of collegiality and respect for their cultural and religious differences.

As an NGO, ICOMOS is one of the three Advisory Bodies of the World Heritage Convention. In order to provide the World Heritage Committee with evaluations, it relies on a network of experts, chosen for their expertise and experience, who offer their technical expertise independently and in accordance with the ethical rules.

ICOMOS, like any organization linked to UNESCO's mission, endeavours to connect peoples and cultures. In this pursuit, the Victoria Falls Fund was created in 2003 to facilitate the mobility of members coming from impoverished countries. In addition, during great natural disasters, ICOMOS makes experts and specialists available in the development of emergency measures for the preservation, conservation and restoration of heritage (Haiti, China, Iran, etc.). It is also a founding member of the Blue Shield.

ICOMOS' mission is to raise heritage awareness. It participates in training activities and implicates young researchers and professionals in its issues and actions. The Raymond Lemaire International Fund awards scholarships to young hopefuls to complete their education or add to their professional experiences.