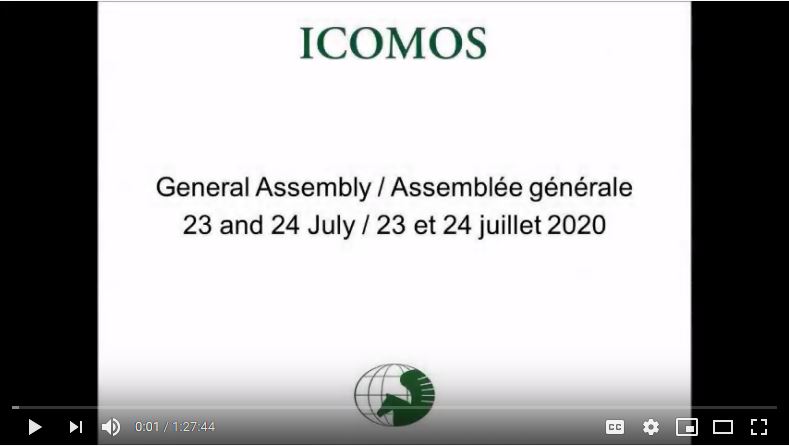 On 23 and 24 July 2020, the first ever virtual ICOMOS General Assembly was held.

Called by the President, at the request of a majority of the members of the Board, the sole purpose of this General Assembly was to seek the agreement of the ICOMOS membership to hold all forthcoming 2020 statutory meetings as virtual meetings (i.e. the Triennial General Assembly, Advisory Committee, Board and Bureau meetings), taking into account the current global situation.We are pleased to advise that more than 90% of the voting members voted in favour of the Board’s proposal.

The meeting took place via ZOOM, and the voting via ZOOM Poll (for the procedural resolutions GA2020-7-1 to 4) and via the Euro-vote Platform (for the main resolution GA2020-7-5).

Over 900 ICOMOS members registered for the online event and over 500 attended.

For those of you who were unable to join us -  here you can find:

During the meeting, the dates for the Triennial General Assembly were announced. It will take place virtually between 3 and 16 December 2020. There will be three or four short zoom meetings corresponding to the votes on resolutions and the successive stages of the elections. Voting will again take place via the Euro-vote platform.

Further information will be provided by the beginning of October and we hope that many of you will join us in December.

We thank all the participants for their enthusiastic attendance, the voters for agreeing to this important step for ICOMOS and the Credentials Committee and Tellers for their support in ensuring the success of this meeting. We welcome any feedback from those who attended the meeting and voted on any suggested improvements in view of the December meeting.