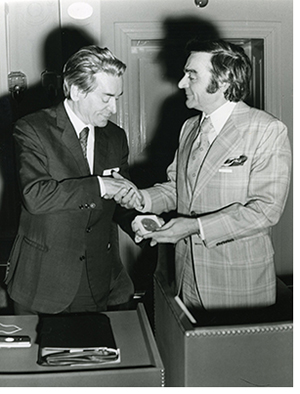 The Piero Gazzola Prize was established in 1979 in memory of ICOMOS’ founding President and is the highest distinction awarded by ICOMOS.

The Prize is awarded every three years during the ICOMOS General Assembly to an individual or a group of people who have worked together and contributed with distinction to the aims and objectives of ICOMOS.

The beneficiary must be a member of ICOMOS and is chosen by a Jury appointed by the ICOMOS Board. The same Jury considers the applications for ICOMOS Honorary Membership, which is conferred by the General Assembly.

The Piero Gazzola Prize, symbolised by a commemorative medal and diploma, has been previously awarded to:

Nominations to the Prize are made by National Committees and should include:

The nomination must be submitted in English and /or French, in electronic format. Additional versions in Spanish are welcome.

Nominations should be sent to the International Secretariat at secretariat@icomos.org by 25 February 2023.

Read our articles on the 21st General Assembly