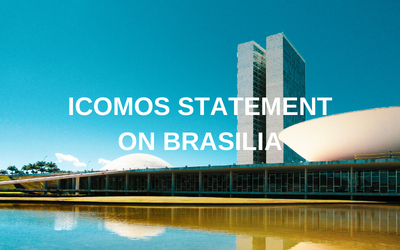 The UNESCO World Heritage Site, which was designed by architect Oscar Niemeyer and urban planner Lúcio Costa suffered several acts of vandalism when thousands of protesters stormed the Supreme Court, the National Congress and the Planalto palace on January 8, 2023.

ICOMOS offers the organisation's expertise to support the restoration of this important heritage of humanity.

ICOMOS supports the condemnation issued by ICOMOS Brazil and the ICOMOS Committees in the Americas of the events which on 8 January 2023 resulted in damages to buildings and works of art part of the modernist ensemble of Brasilia, the capital of Brazil. The first, and so far only, modern city to be inscribed on the UNESCO World Heritage List represents “a singular artistic achievement, a prime creation of the human genius, representing, on an urban scale, the living expression of the principles and ideals advanced by the Modernist Movement”. Last weekend – the buildings of the three powers (Presidential Palace, Supreme Court and Congress with its twin high-rise buildings flanked by the cupola of the Senate building and by the inverted one of the House of Representatives), that are the embodiment of Brazilian democracy, were at the centre of the attacks.

These events in Brasilia represent not only an aggression against the Brazilian people and the country’s democratic processes, but also against a cultural heritage of which Brazil is the custodian for the whole of humanity. Any repetition must be prevented. ICOMOS places itself at the disposal of the Brazilian authorities, through ICOMOS Brazil, to contribute to the recovery of this important heritage of humanity.