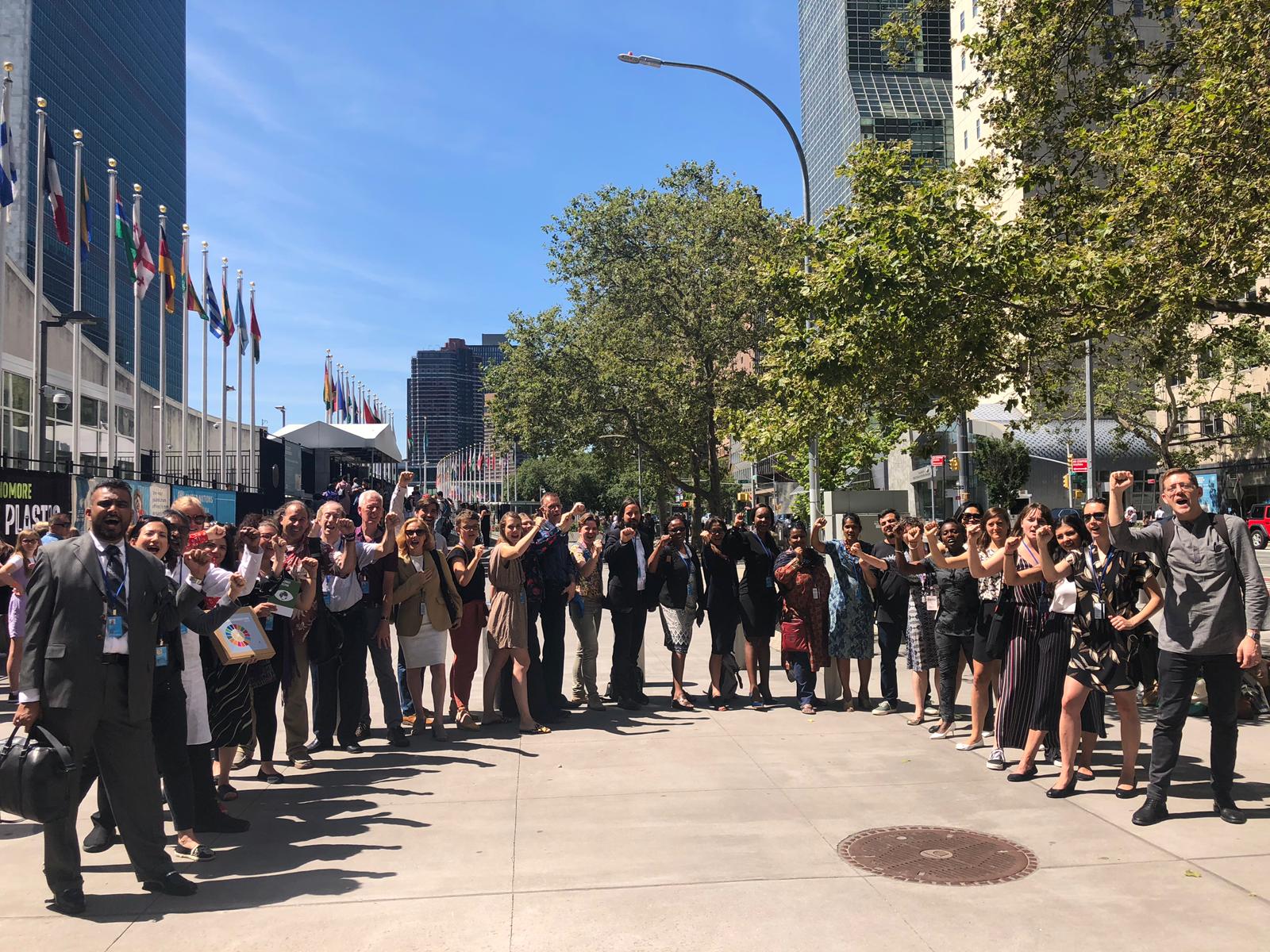 As the UN Decade of Action kicks off for the "transformative 2030 Agenda", ICOMOS’ work on advocating the role of cultural heritage in achieving the Sustainable Development Goals (SDGs) is steadily gaining visibility, set to impact the international policy arena and our own heritage practice. The ICOMOS SDGs Working Group (SDGWG) continued its wide range of activities in 2019, from developing partnerships and advocacy to internal mobilization through national and scientific Committees.

General activities in 2019 for external partnerships and advocacy included contributions to policy documents and events, such as the ‘Model Approach to Environmental and Social Standards for UN Programming’, the NGO Statement to the Global Platform for Disaster Risk Reduction (GPDRR), the report of the UN Special Rapporteur in the field of Cultural Rights on ‘Cultural Rights and Public Spaces’, the UNESCO conference 'Culture 2030 | Rural-Urban Development: The Future of Historic Villages and Towns' in Meishan, the Workshop on ‘World Heritage and Sustainable Development in Africa: Implementing the 2015 Policy’ in Robben Island and to academic documents and events, such as the Salzburg Global Seminar’s Session 614, ‘What Future for Cultural Heritage? Perceptions, Problematics, and Potential’, the conference ‘Thinking and Planning the Future in Heritage Management’ organized by the UNESCO Chair on Heritage Futures at Linnaeus University, the Knowledge Café and Panel sessions at the ICOMOS Symposium on ‘Rural Heritage - Landscapes and Beyond’ in Marrakesh and the LDE Conference on ‘Heritage & SDGs’ hosted by TU Delft (see also: ‘Inputs by ICOMOS for Various Global Policy Documents in 2019’). The Twitter account @icomosSDG2030 reached approximately 1,800 followers and 200,000 tweet impressions over the year.

Engagement for the 7 Priority Actions

Our specific activities were organized under the ‘7 Priority Actions’, based on the 2017 ICOMOS Action Plan ‘Cultural Heritage and Localizing the SDGs’": (1) The ICOMOS SDGs Policy Guidance; (2) Engagement with the UN High-Level Political Forum (HLPF); (3) National liaisons and Localizing SDGs; (4) Engagement with World Heritage and the Historic Urban Landscape (HUL) Recommendation; (5) Strengthening Urban Partnerships and Engagement with the New Urban Agenda; (6) Metrics and Indicators; and (7) Fundraising and Human Resources.

Three major initiatives are particularly worth highlighting among these, from the strategic advocacy and governance aspects:

First, the ‘ICOMOS SDGs Policy Guidance’ is a flagship initiative in development since 2018, aiming to provide a robust and versatile resource to all kinds of stakeholders, within and outside of the heritage community, on the role of cultural heritage in sustainable development. This scientific resource, comprising policy statements on how heritage is affected by development and how it contributes to making developing more sustainable, draws on ICOMOS doctrine and case studies to inform evidence-based policy and discussion, through clear guidelines both for global, high-level policies and for local, grassroots implementation of these policies. So far, a concept note has been prepared, an Experts Meeting held in October 2019, an online survey for ICOMOS members is ongoing, and preliminary texts of the Policy Guidance are being prepared. The document draft was due to be launched at the 20th ICOMOS General Assembly in Sydney in October 2020.

Second, the report ‘Culture in the Implementation of the 2030 Agenda’ prepared by ICOMOS in collaboration with United Cities and Local Governments (UCLG), International Federation Library Associations and Institutions (IFLA) and our partners in the renewed #Culture2030Goal campaign, analyses the presence of the ‘culture’ theme in the HLPF reports since the adoption of the 2030 Agenda. This was a unique contribution to the literature on the culture-sustainable development relationship, generating much interest on social media for the campaign, most recently through the guest article promoting the report on IISD news portal. 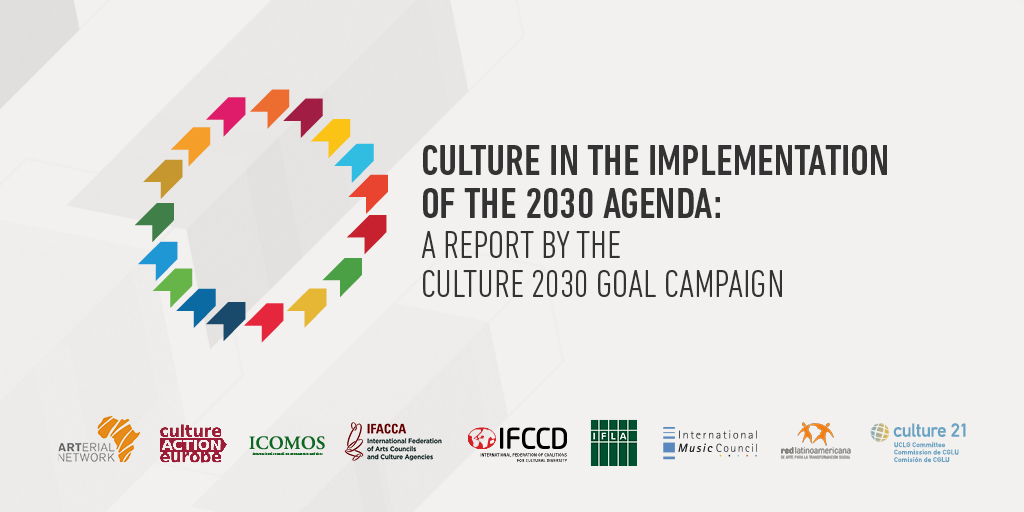 The third activity undertaken by the ICOMOS SDGWG falls within the scope of our close collaborations with other ICOMOS Working Groups – in particular those for Climate Change and Heritage and Our Common Dignity: Rights-Based Approaches – in the spirit of ‘transversality’ and the universal nature of the SDGs. SDGWG members contributed to the Climate Change and Heritage WG report, “The Future of Our Pasts: Engaging Cultural Heritage in Climate Action”. The joint SDGWG-RBAWG session in the 2019 Advisory Committee Meeting in Marrakesh provided a chance to discuss issues shared by these groups and to explore the links between sustainable development, human rights and resilience in the face of threats like climate change. The groups are working towards further integration of SDG-RBA-Climate-related concepts and principles in ICOMOS statutory documents, to strengthen the sustainable heritage conservation practices of at all ICOMOS Committees and governance levels.

Progress made on the 7 Priority Actions also includes the following main activities:

Going forward, our work is informed by the recommendations adopted by the 2019 Advisory Committee, which "requests the SDGWG and all ICOMOS bodies and members to continue to advance the ‘7 Priority Actions’ adopted in the previous year, taking as reference the ICOMOS Action Plan" and “recommends that ICOMOS expands its vision and scope of activities beyond SDG11.4 to include more of the full set of SDGs."

We thus call on all ICOMOS members to engage in the SDGs, e.g. remaining Committees to appoint representatives to the SDGWG, and remain at your disposal to provide assistance.

By Ege Yıldırım, ICOMOS Focal Point for the SDGs

The ICOMOS webpage on Climate Change and Sustainable Development