(for the time being, available only in English - Pour l'instant, disponible uniquement en anglais)

The Scientific Council (extracts from Eger-Xi’an Principles for The International [Scientific] Committees of ICOMOS, July 2008)

2. The Council shall elect three officers from among its membership to oversee the activities of the Council. These officers shall be from different ISCs and shall be elected to three-year terms to coincide with the election of the Advisory Committee President. The officers shall distribute the duties and responsibilities among themselves as they determine to best meet the needs of the Scientific Council. The officers may co-opt other ISC members to assist them in their work.

3. The officers shall represent the interests of the ISCs in the Executive Committee of ICOMOS. Representatives shall serve as active liaisons between the Council and Executive Committee and shall communicate regularly with the members of each of the two bodies. Representatives should take a lead in raising international awareness of the capabilities of the ISCs as well as in developing strategies to support ISC activities.

4. The duties of the Scientific Council are:

a) Serve as the coordinating body of the ISCs.

b) Meet at least once a year in conjunction with, and also separate from, the annual meeting of the Advisory Committee of ICOMOS.

c) Prepare a summary annual report on ISC activities and progress made on the Scientific Plan.

d) Advise the Executive Committee on best practices and performances, as well as best use of the ISC resources, as they relate to the advisory and contractual duties of ICOMOS to UNESCO, the World Heritage Centre, ICCROM and any other international, regional or national heritage organization.

e) Develop and oversee the implementation of a 3-year Scientific Plan with a corresponding budget, and present it to the General Assembly for its adoption as part of the ICOMOS Work Programme required in Article 9 of the Statutes. The Scientific Plan shall be drafted in broad consultation with the ISC membership; it shall be multi-disciplinary in nature and will define areas and methods of inter-ISC cooperation. The Plan / Programme shall include clear objectives, a work plan, and a strategy for its completion; the budget will include the identification of existing and potential revenue sources.

f) Identify gaps among the ISC fields of specialization, and make appropriate recommendations to fill them.

g) Look for ways to render more effective and available to all of ICOMOS the expertise of the ISC members and the overall work of the ISCs, especially in the conceptualization and organization of the triennial Symposium of ICOMOS.

h) Adopt a process for the triennial performance evaluation of each ISC; carry out such evaluation; and convey its results and pertinent recommendations to the Executive Committee of ICOMOS as part of its annual report.

i) Receive, evaluate and formulate appropriate responses to requests for technical assistance from the Executive, Advisory, and National Committees of ICOMOS.

j) Receive and evaluate proposals for the formation of new ISCs and make recommendations concerning their approval to the Executive Committee of ICOMOS.

l) Investigate issues or complaints regarding the activities, governance, policies or performance of an ISC, and take the appropriate action to solve them, or refer them to the Executive Committee of ICOMOS. 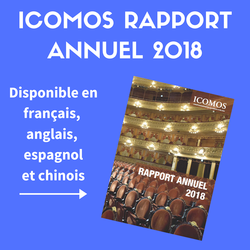