Mr Mouton, Vice-President of ICOMOS Europe, participated in the Heritage First conference in Greece, alongside with ICOMOS Greece. The conference makes an appeal for a common approach for sustainable heritage in particular in the urban environment . The conference brought together important heritage stakeholders from the European Commission, the Parliament, the Council of Europe, NGOs but as well from  UNESCO, represented in the person of Mr R. Kishore, Director of the World Heritage Centre.

Important appeals and discussions were made. In the urban context Mr. Mouton presented the important works of ICOMOS done during the 17th GA in the Scientific Symposium ‘Heritage, driver of development’ 27 November - 2 December 2011, Paris, France. He pointed in particular to the importance to look at the urban area not isolated from the rural area, but to have a territorial approach. Culture and sustainable development has to very 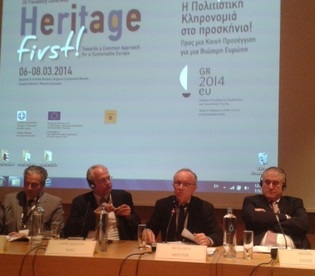 much understood in the sense that UNESCO has outlined it in its Universal Declaration on Cultural Diversity:  Noting that culture is at the heart of contemporary debates about identity, social cohesion, and the development of a knowledge-based economy. - the roots of development, understood not simply in terms of economic

growth, but also as a means to achieve a more satisfactory intellectual, emotional, moral and spiritual existence.

Ms. Vassiliou, Commissioner for Education, Culture, Multilingualism and Youth, announced that, following up on the new narrative for Europe a common text on cultural heritage will be published in the coming months.

For more information on the conference, please refer to the following documents: