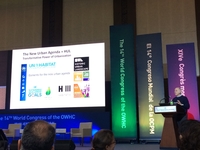 ICOMOS had the pleasure of participating in the 14th World Congress of the Organization of World Heritage Cities (OWHC), held under the theme “Heritage & Communities: Tools to Engage Local Communities” in Gyeongju, Republic of Korea. Held from 29 October to 3 November 2017, the OWHC Congress provided a platform to share and discuss member cities’ innovative and collective actions with the mutual goal of preserving World Heritage Sites.

The congress provided many opportunities for strengthening the close collaboration between ICOMOS and OWHC, reinforced by a Memorandum of Understanding signed in 2013 with the support of the relevant bodies of ICOMOS, i.e. the Scientific Council and ICOMOS International Scientific Committees, in particular the Committee on Historic Towns and Villages (CIVVIH). This partnership developed a collaborative framework for common interest areas in view of the conservation of the cultural heritage of World Heritage cities and established a collaboration between the two major organizations, through sharing administrative and scientific knowledge, with the common goal to “enhance the protection and best use of the urban cultural heritage.”

ICOMOS members actively contributed to the lectures and discussions throughout the week’s workshop programming. The official representation in this event of ICOMOS was by Hae Un Rii, president of ICOMOS Korea, and a (video) message from ICOMOS President Gustavo Araoz was shown at the opening session. The Scientific Day of the Congress, on 2 November, featuring presentations by member cities, commenced with Michael Turner, endowed chair professor of UNESCO, giving the keynote address and continued with Richard Mackay, Director of Mackay Strategic, as the moderator of the Scientific Day.

An important event within the congress was the Expert Workshop on the theme ‘Community and Heritage,’ where presentations showcased a range of examples of different approaches, techniques and outcomes on community involvement in the protection and management of urban heritage. Workshop participants, organized to be interdisciplinary, included heritage specialists, as well as experts from other academic fields such as psychology, public administration and environmental protection. ICOMOS members who contributed as experts included Richard Mackay (moderator), Ana Pereira Roders, Aylin Orbasli, Amareswar Galla, Ege Yildirim, Ilaria Rosetti, Kristal Buckley, Michael Turner, Nobuko Inaba and Sujeong Lee. The workshop, and the congress at large, were also occasions to launch the new ‘Community Engagement Principles’ developed by the OWHC-Asia Pacific region.

The 14th OWHC World Congress Experts’ Workshop concluded that:
1. Information and resources regarding ‘community engagement’ presented and discussed at recent expert workshops should be shared widely through a web-based / digital platform. This platform should be accessible through the OWHC, UNESCO and ICOMOS websites.
2. Resources, tools, techniques and case studies should be presented in a manner that is mindful of the UN Sustainable Development Goals, New Urban Agenda, the Recommendation on the Historic Urban Landscape (HUL), as well as other existing approaches.
3. The shared resources should incorporate the ‘Community Engagement Tools’ developed by the OWHC-AP alongside existing tools.
4. A standard template with principles, tools and techniques should be prepared so that inspiring and informative case studies may be presented in a succinct, standard, searchable format, suitably tagged, and cross referenced.
5. Local leaders, officials and site managers in World Heritage Cities should be regularly consulted or surveyed regarding their needs and priorities for tools, techniques and capacity building. This consultation should inform the content and format of the shared resources and future capacity-building initiatives.
6. Future OWHC World Congress sessions, and other OWHC ‘expert’ events, should include engagement with, training and learning opportunities for the local leaders, officials, site managers and the community members of World Heritage Cities that are responsive to their identified needs. Participants in this process should receive appropriate recognition or certification.
7. OWHC World Congresses and regional meetings should include an ongoing process and program incorporating input from relevant experts.
8. While the above-mentioned resources and processes are directed at World Heritage cities, they may have wider application for other urban areas and forms of heritage.

Two other workshops were held with contributions from ICOMOS, i.e. the Capacity Building Workshop for the Cities with Properties on the Tentative List on 31 October, organized by ICOMOS Korea, with the participation of Hae Un Rii, Dongju Lee, Suk Young Han, Mie Ok Chae and Kristal Buckley, and the Mayors Workshop on 3 November, with Ana Pereira Roders and Aylin Orbaşlı speaking as facilitators. Additionally, the World Heritage Young Professionals Forum took place throughout the congress, with mentorship and presentations by ICOMOS members Richard Mackay (World Heritage Cities and State of Conservation), Ege Yildirim (the Sustainable Development Goals and Safeguarding World Heritage Cities), Sujeong Lee (Community Engagement for preservation of Historic Cities: Case of Baekjae Historic Areas) and Kristal Buckley (the Historic Urban Landscape approach in the City of Ballarat).

As part of the Congress, the Jean-Paul L’Allier Heritage Prize was awarded to the City of Quito, Ecuador. ICOMOS had an active participation in the award evaluation, through Sofia Avgerinou Kolonias, president, and Samir Abdulac, vice-president of CIVVIH. We congratulate our colleague Angelica Arias, director of the Quito Metropolitan Institute of Heritage (IMP) and a close partner of ICOMOS since the Habitat III summit, who received the award on behalf of Quito Municipality.

At the OWHC General Assembly held on 3 November, the final recommendations from the Scientific Day were adopted without change, which urged World Heritage Cities to:
- Acknowledge that local people have the right to participate in identification, conservation and management;
- Adopt a policy for community engagement, which is relevant to the local cultural context;
- Consult with local people about decisions which may affect them;
- Encourage communities input to initiatives and projects; and
- Instigate outreach programs which present and develop heritage values with local people and to wider communities.

We would like to thank Jahyun Jang, Regional Coordinator of OWHC Asia-Pacific, for his dedication and excellent work, H.E. Yangsik Choi, Mayor of Gyeongju for his patronage and the OWHC leadership and secretariat for their efforts in the successful organization of the 14th OWHC Congress.