One year after the signing of the Memorandum of Understanding between ICOMOS and the United Cites and Local Governments (UCLG), the partnership
between the 2 international organisations remains strong, emphasizing the role of culture and heritage professionals as important actors to create sustainable cities and territories.

The UNESCO World Conference on Cultural Policies and Sustainable Development, also known as Mondiacult 2022, was held in Mexico City from 28-30 September 2022, forty years after the first of its kind organised in Mexico City in 1982. The important gathering provided the opportunity for the two organisations to speak with ministers of culture and other local and regional leaders to explain the importance of advocating for Culture to have its own goal in future frameworks, and especially the post 2030 UN Agenda for sustainable development. As part of the many events organised by ICOMOS and UCLG, Jordi Pascual, coordinator of the UCLG Committee on Culture spoke at the ICOMOS-Mondiacult 2022 Culture Forum and shared UCLG’s perspective on the role of cultural heritage in democracy, citizen's participation and sustainable development. Gabriel Caballero, ICOMOS Focal Point for the UN SDGs, participated at the #Culture2030Goal campaign events and highlighted the importance of the Mondiacult 2022 Conference as a good starting point to push for more cultural actors to be part of the global initiative to elevate culture as a goal after 2030. 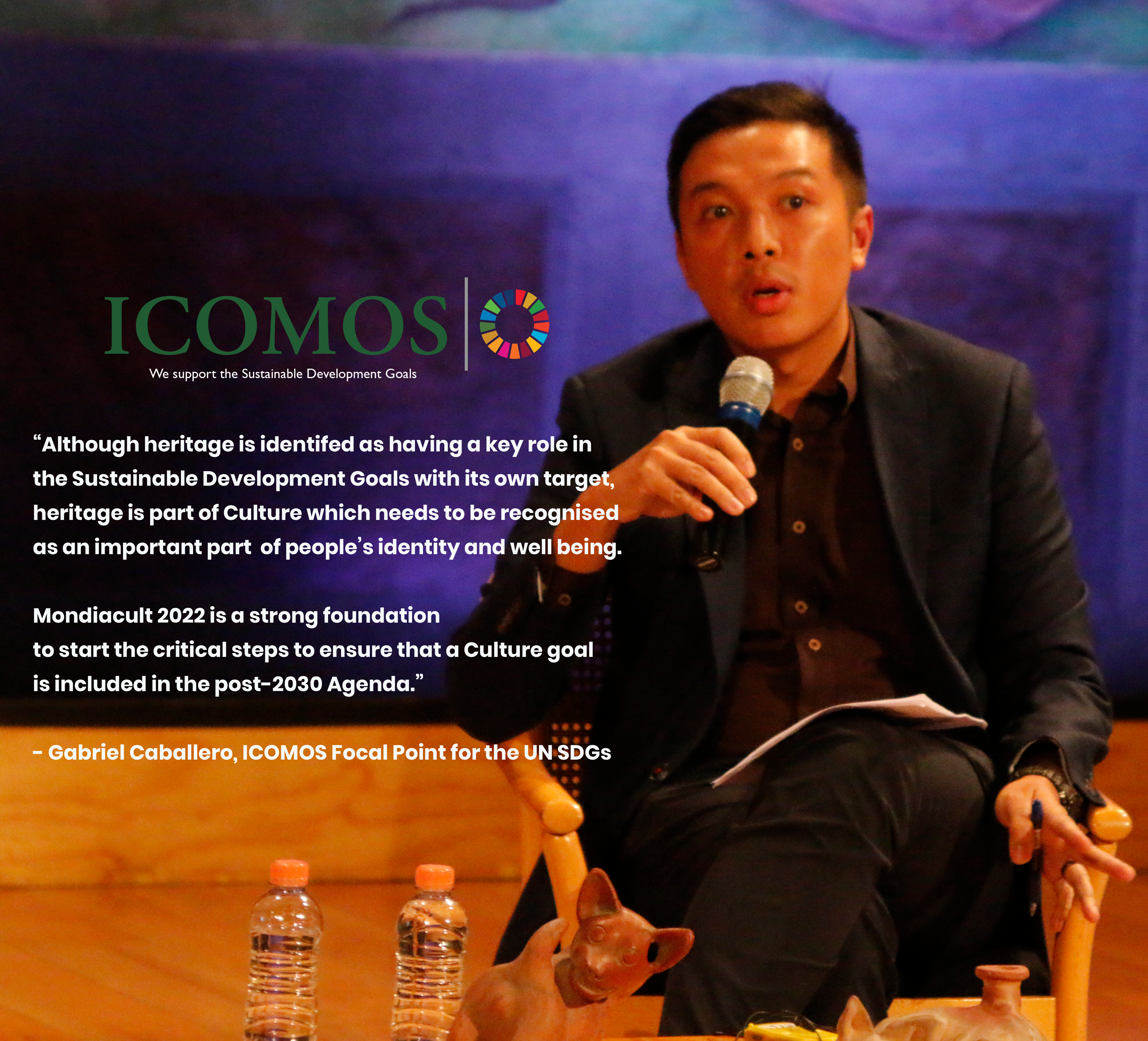 At the recently concluded 7th UCLG World Congress and Summit of Local and Regional Leaders – organised in Daejeon, Republic of Korea, from 10 to 14 October 2022 and whose main outcome is the "UCLG Pact for the Future of Humanity: for the People, for the Planet, for the Government", ICOMOS representatives, Se Hoon Park and Hae Un Rii were part of the discussions on Culture and Climate, the future of cultural rights to shape new sustainable development and Culture in the Sustainable Development Goals. Se Hoon Park, ICOMOS Korea representative on the ICOMOS Working Group on the Sustainable Development Goals, highlighted that climate action, the promotion of cultural pluralism and intercultural dialogue, governance and civil society cooperation for cultural policies and culture as the 4th pillar of development are among the priorities of ICOMOS. Hae Un Rii, President of the ICOMOS International Scientific Committee on Places of Religion and Ritual, presented various initiatives, including the Rights-Based Approaches Working Group ‘Our Common Dignity’ and the ICOMOS Buenos Aires Declaration marking the 70th anniversary of the Universal Declaration of Human Rights, which aims at building stronger relationships with communities and peoples to guarantee their inclusion in heritage decision-making. 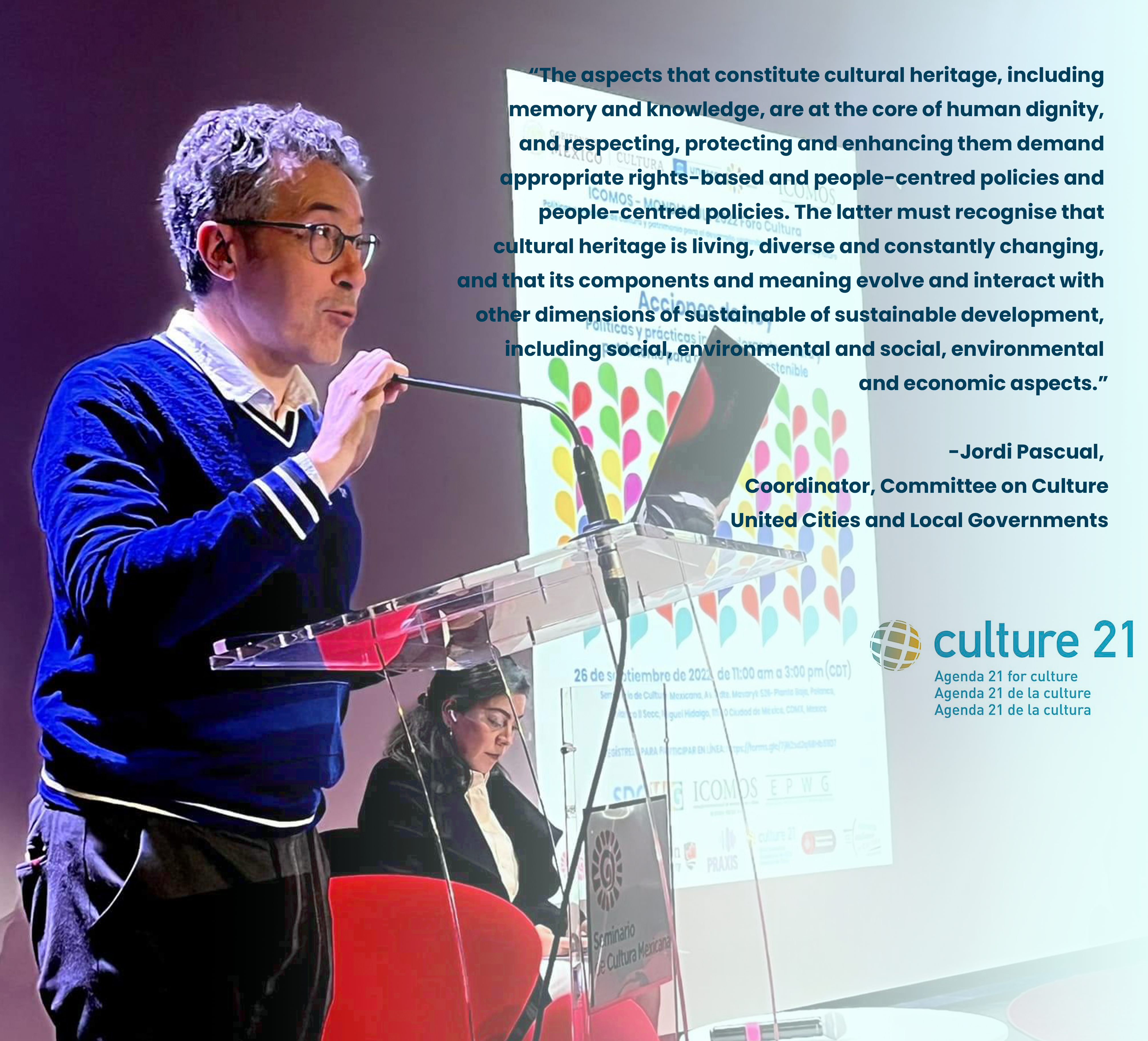 Both organisations are committed to making cities and other urban areas more liveable, engaging and alive through local public policies on culture and heritage.Through shared activities and advocacy, ICOMOS and UCLG strengthen the role of culture and cultural policies as a key resource for communities, cities and territories of the future.

For more information on ICOMOS and UCLG and the #culture2030goal campaign please see the following info:

Download and read the full report in English / French / Spanish