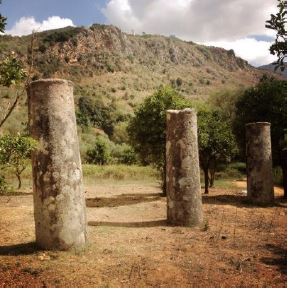 ICOMOS International invites you to read and share the Statement of Concern by ICOMOS Lebanon regarding the Bisri Valley and Dam Project, Chouf/Jezzine, Lebanon:

"The International Council on Monuments and Sites of Lebanon (ICOMOS-Lebanon), as a national non-governmental organization dedicated to the conservation of Lebanon’s monuments and sites, is very much concerned about the proposed Bisri Dam Project to be constructed in the Bisri Valley, located between the Chouf and Jezzine districts south of Beirut. Upon reviewing the available documentation and reports including the Environmental and Social Impact Assessment Report Vol.1, CDR 2014 related to the Dam construction, ICOMOS Lebanon believes that the current state of knowledge is largely insufficient to allow the destruction of valuable cultural assets - including the landscape itself - present in the Bisri Valley. There is currently enough evidence to suggest that Bisri’s cultural value has a high potential of being unique or outstanding on the regional or even the universal level. It is also evident that this value is interrelated with the site’s context and nearby valuable assets. Besides the ecological disaster it entails, the dam project will lead to a heavy loss for the cultural heritage value of the whole region and affect the potential for World Heritage Listing of a site currently inscribed on the tentative list, the Eshmoun Temple - a monumental Phoenician structure dedicated to the tutelary Phoenician god of Sidon and characterized by its “healing water” cult.

Bisri Valley belongs to a system of converging valleys including Awali, Barouk, and Array, which have been sites of human settlements and activities since ancient times as testified by archaeological evidence dating back to: prehistoric periods (Palaeolithic, Neolithic, and Chalcolithic) as well as to a wide range of historical periods (Canaanite during the Bronze age, Phoenician and Babylonian/Persian during the Iron age, Hellenistic, Roman, Byzantine, Arab, and Ottoman). These valleys therefore cover the full span of human history in the region. Their importance can be mainly attributed to the existence of two important ancient roads, including a still used Roman road, connecting the two coastal cities of Saida (Sidon) and Sour (Tyre) to Jezzine, the Bekaa Valley and the further hinterland of the higher Chouf area. Towns, villages, forts, temples, churches, and burial grounds compose the rich cultural landscape of these valleys. In the last few centuries, as the economic role of Saida became less important, many sites in these valleys were abandoned, while modern development had an insignificant impact on them. As a result, these valleys, and especially the Bisri Valley, are today amongst the best-preserved valleys of Mount Lebanon.

The aforementioned valleys constitute a highly valuable cultural landscape which may be unique or at least outstanding in the regional and universal context. They also hold a rare representation of an antique communication and trade road which may also be of high regional or even universal value.

The Bisri Valley lies above the Roum seismic fault line, which generated its particular and distinctive topography, different from most valleys of the Lebanese mountains. Unusually flat and fertile, it was cultivated since ancient times. The continuity of the rural occupation of the valley from the prehistoric times until today was proven by merely archaeological surveys. According to these surveys, there are at least 77 archaeological sites, in Bisri, that are in danger, and could be drowned by the dam project, among which are the remains of a large Roman temple, a vaulted structure going back to the Byzantine period, the Mar Moussa church and the remains surrounding it which have an important associative value for the local community in their relation with the context of the valley.

In this regard, the Bisri Valley, on its own, constitutes a unique cultural landscape where agricultural, commercial and cultural activities have intertwined for centuries.

It is also suspected that Bisri Temple shares a common narrative with the Eshmoun temple - a monumental Phoenician structure dedicated to the tutelary Phoenician god of Sidon 15km below Bisri Valley- and its cult of “healing water”. This is mainly due to the location of the two temples on both extremities of the Awali river, known as Eshmoun river during Phoenician times. Today, only four columns still appear from Bisri temple which goes back to the Roman period. Archaeologists, however, suspect that remains of a previous temple, possibly going back to the Phoenician period, exist underneath the remains of the exiting Bisri temple and that a pilgrimage route used to connect it with the site of the Eshmoun temple.

Since Eshmoun temple is included on the tentative list to be inscribed as a UNESCO World Heritage site, it is highly important that the associative link with Bisri be properly explored. Another crucial aspect is the relation between Eshmoun temple and the natural springs around it which were historically associated with it and its cult of healing water. These springs could dry out if the dam is executed, therefore jeopardizing the potential for the Eshmoun temple site to be inscribed as World Heritage.

As of today, there are no studies, comparative analyses, or researches which justify that the foreseen destructions of cultural assets in Bisri Valley are permissible. Surveys were made without any thorough study of the thousand-year-old land occupation and exploitation and in the absence of systematic archaeological excavations in an area destined to disappear.

NB:
- It is important to note that the dam’s construction is an infringement to the National Physical Masterplan of the Lebanese Territory (2005); which identifies the Bisri Valley as an exceptional natural landscape that needs to be protected; and of Decree N° 1-131 of the 1/09/1998 issued by the Ministry of Environment, which classifies the site as a protected natural area.
- It is also important to note that the local population and the municipalities of four villages: Mazraat el Chouf, Bsaba, Amatoor and Bater; surrounding the Bisri Valley withdrew their support to the dam project and now officially reject its construction.

In light of all the above, ICOMOS-Lebanon believes that the construction of the dam in Bisri Valley could lead to:
- Irreversibly damage the integrity of the wider context of cultural landscapes of the valleys of the Chouf/Jezzine, which may be of outstanding value;
- irreversibly damage the integrity of an antique communication and trade road linking the coast and notably the ancient harbour of Sidon with the nearby mountain and the hinterland;
- irreversibly damage the attributes which support a rich cultural landscape where agricultural, commercial and cultural activities intertwined for centuries and which may be unique or at least outstanding in the regional or universal context;
- irreversibly damage the potential for the listing or valorisation of other sites, mainly the unique and very important Eshmoun Temple, which is already on the tentative list;
- destroy valuable sources of information - mainly archaeological - which have not been fully explored yet; and
- greatly affect the local community which counts on the millennia-old agricultural activity for its livelihood, and shares strong associative bonds with some of the cultural sites which will be damaged by the dam.

Therefore:
ICOMOS-Lebanon demands an immediate suspension of the Dam project and the elaboration of an Action Plan for a comprehensive study of the cultural heritage of Bisri Valley taking into account all the points mentioned above,

ICOMOS-Lebanon also demands that such study be followed by an impartial Heritage Impact Assessment report that would thoroughly evaluate the impact of the dam project on the cultural value of Bisri Valley,

ICOMOS-Lebanon also expects the commitment of all parties in endorsing the recommendations of such Action Plan and HIA report mentioned above.

Read the full statement by ICOMOS Lebanon in English, French and Arabic.